San Antonio and other Municipal Buses

Public transportation buses, whether operated in San Antonio or wherever are mostly non-profits. They can count on only about one-third of their needed revenue coming from fares, with the remainder often from taxes.

Operating within the city limits, they are usually controlled by the city government and some other overseeing entity. The San Antonio Regional Transit Authority controls the Metro busses in the city limits. These companies define the specific routes and determine the charges, schedules and maintenance. They also are charged with the most important function – hiring the drivers who have great responsibility for the commuters relying upon them.

Passengers transported by municipal buses amount to only one-half the number of school children using bus service. As a general rule, city bus service is fairly safe. This is true in terms of the number of passengers per day, as compared to the number injured or killed. Buses are huge and heavy and must be navigated in tight, urban confines. When there is a collision, the passengers have no real internal protection. Public transit lacks airbags and seat belts, so the jolt of impact is felt directly by the victim. This amount of force can be devastating.

Interstate motorcoach companies include Greyhound and Trailways, although today there are over 4,000 such businesses. Many of them concentrate primarily within a specific geographical region.

All the companies in this industry account for nearly a billion traveling miles a year for passengers. These swift-moving behemoths are responsible for relatively few of the roadway mishaps in the United States. However, when there are wrecks, they tend to be catastrophic for all the commercial passengers.

Most private interstate drivers are hired by the bus company and are direct employees. Some contract out to other firms or hire independent contractors. In any case, the owner of the bus in responsible for any negligent driving misconduct. Buses are known in the law as common carriers. This is a shorthand way of stating that they have a very high legal responsibility. Many of the legal presumptions are against them because of the serious duty owed by the bus company to protect passengers and pedestrians.

Charter buses are privately retained forms of transportation, by a specific group for a specific destination. These particular-purpose forms of travel are hired to take a group of like-minded individuals to shows, concerts, sporting events, and other programs. Sometimes they are tour buses, which carry specific-interest travelers from out of town. However, except for major corporations bringing in tourists from South America and Asia, they are infrequent in the South Texas area.

Charter buses are almost always owned and managed by private companies. This usually makes it easier to identify who has control over the hiring, training and conduct of the drivers. When filing lawsuits, there often are fewer named defendants.

Theories of liability can focus upon the driver’s operational negligence. Sometimes the fault is poor maintenance – especially of the tires. If there has been noncompliance with specific safety regulations imposed by the government, this could be a meritorious claim as well. 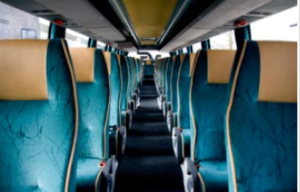 Each year about 150 people are killed in the US as a result of larger-size vans, according to the National Highway Transportation Safety Administration (NHTSA). Of these, almost a quarter of the deaths are the result of these vehicles rolling over before crashing. When a heavily-loaded van quickly changes direction, even a slight amount, there is a danger of control loss. The center of gravity with these vehicles can shift to the side or rear and pull the van or access vehicle out of its lane.

Van accidents are common in South Texas. They offer an ideal form of transportation for smaller groups that do not require the expense of a bus. Of the larger sizes of vans, many are rented vehicles that may carry with them a number of hidden corporate defendants. Each one must be identified through careful detective work, as well as analysis of incorporation articles and other Texas state filings.

Commonly used for mid-sized groups are 15-passenger vans. All varieties of social groups can achieve geographic mobility - sports teams, religious groups, daycare centers, social and youth organizations and senior citizen programs. Rowdy individuals within groups, going to games and tournaments, can sometimes cause a wreck which injuries other group members who were in no way negligent.

Interestingly, nearly one-half of all fatal van involve one-vehicle crashes. Transportation experts have studied this significant number and debated the cause. It is believed that many groups are traveling long distances and the driver falls asleep. Others believe it is more the result of distractions inherent when a number of bored riders cause high-spirited, dangerous diversions.

Attention must be paid to investigating who in Texas hired the bus company and what is the corporate structure of that business entity. It is not uncommon for negotiated contracts to involve various side deals between certain businesses along the route. They benefit from patronage that is brought to them. This is standard practice for non-school bus hiring that involves commercial destinations.

Commissions are often derived from the bus company which promotes and encourages Texas customers to be funneled into an arranged destination. This is especially true if the Texas tour bus was retained by a contracted arrangement with another tour company, a hotel or a travel agency.

Sometimes a third party could be involved, and therefore subject to civil judgment for compensatory damages. This is almost always true if there is a subsidized benefit as part of the bargain. Fraternal associations, schools, civic associations, and retirement facilities are the most common variety found in tour bus accidents. For more information please visit this website